Every week during the coronavirus crisis, CCDF will be providing its clients with an economic update to help them understand the wider economic implications and better plan their own recovery.

This week, we focus on small business performance, consumer confidence, and exports.

The worst is behind us. The Saskatchewan and Canadian economies are showing signs of life, as COVID-19 cases fall and provinces and territories roll out their strategies to safely reopen. The trough in economic productivity statistics seems to have been towards the end of March, though on a month by month basis, April’s numbers will appear the worst since the shutdown only affected about two weeks in March.

Almost every available economic indicator with data from May shows slow but steady improvement. This is important because it will provide confidence that the economy can indeed rebound from the pandemic.

How are small business coping? According to the Canadian Federation of Independent Business’ weekly surveys of small business owners, which began at the beginning of the shutdown, Saskatchewan’s businesses are coping as well as, or better than, the national average in most respects. Over half (51%) of the province’s businesses are now fully reopened.

The median cost of the pandemic thus far to Canadian small businesses, due to extra costs, lost sales, production slowed or halted, and cancelled plans, is $60,000. The greatest concerns of small business owners include the state of the economy, reduced consumer spending, and cash flow. The hardest hit sectors include arts & entertainment, as well as those businesses providing hospitality, retail and personal services. The companies that have seen the fewest disruptions include those in the agriculture, construction, financial services, and natural resources sectors.

When will consumers start buying again? The Index of Consumer Confidence measures consumer optimism on the state of the economy and is based on spending and saving trends. April saw a record drop, but the index climbed 16.2 points in May, after hitting a record low last month of 47.56 (2014 = 100). The Index now sits at 63.7, slightly higher than its trough during the 2008 financial crisis (56.3).

The Consumer Price Index, by contrast, measures the price of a fixed basket of goods and services. It declined 0.2% on a year-over-year basis in April as lower energy prices pushed the rate into negative territory for the first time since September 2009. Gasoline prices in April were down 39.3%, the largest year-over-year decline on record.

Excluding energy prices, consumer price inflation in April was 1.6%, led by higher food prices. They rose by 3.4% on a year-over-year basis in April, based on supply-related issues that bolstered prices for meat, and strong demand for groceries and household cleaning products. Sales at food and beverage stores rose by 22.8% in March, and retail e-commerce in March was up 40% on a year-over-year basis.

Meanwhile, prices for clothing and footwear fell 5.9% on a monthly basis in April, the largest decline on record. Motor vehicles and parts also dropped sharply. Over three-quarters of wholesalers reported that their business activities in March were impacted by COVID-19, with wholesalers of home furnishings and personal goods amongst the most affected.

Saskatchewan exports are hot. Exports – the trade in goods to other countries – play a huge role in Saskatchewan’s economy, with over 70% of what we produce going to consumers abroad. Despite the pandemic, and preceding that the rail blockades, Saskatchewan exports in the first quarter of 2020 (January-March) actually grew by 4.2%. Even more impressive, Saskatchewan exports increased 30.5% between March and April 2020, the highest rate of growth among all provinces. This was led by strong demand for canola seed, pulses, canola oil, agriculture machinery, oats and soya beans, as consumers around the world looked to put non-perishable food items into their cupboards.

This speaks to the province’s strong fundamentals that should help us weather COVID-19 relatively intact. RBC Economic’s latest analysis saw Saskatchewan lose 16% of its productivity in April, but expects a rebound to 93% of our pre-COVID economy by July. 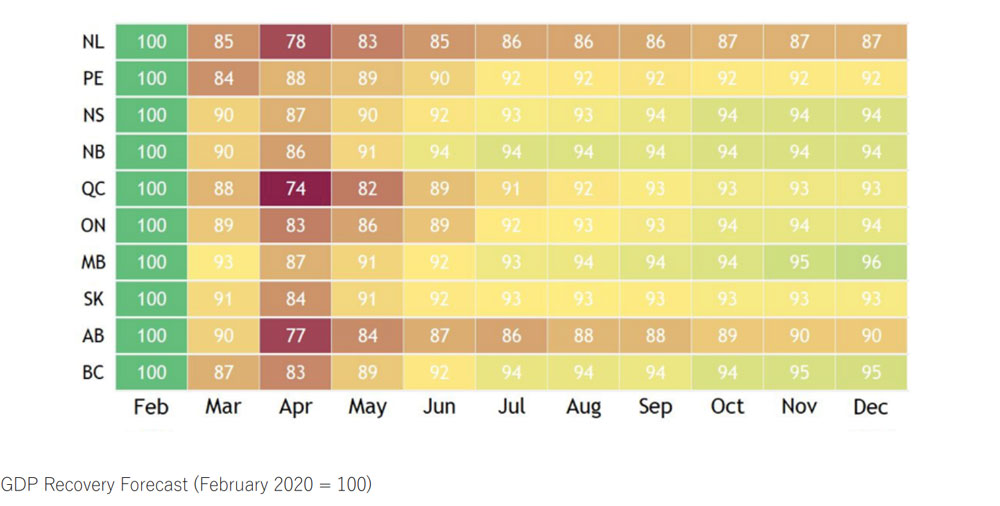 When can we expect to see the Aboriginal business funding roll out? Although the federal government announced $306 million dedicated to support Indigenous businesses in mid-April, details have been slow in coming. Today however, the National Aboriginal Capital Corporations Association finally signed the agreement with the Government of Canada. CCDF should be able to start rolling out funds in the coming weeks and will keep its clients posted on the process to apply.

How can my business adjust to the new economic reality in Saskatchewan? CCDF is offering all of its clients up to $10,000 for professional assistance, through its Business Support Program, to navigate these difficult times, and has retained a number of consultants to help you with your specific needs. Areas of support include assisting clients with addressing HR issues, acquiring economic intelligence, obtaining financial management advice, and more. Call your CCDF Business Development Specialist to access this program right away, and better understand what supports and strategies will work best for your circumstances.

What are some good resources to learn more? Morris Interactive has compiled a list of free resources that will provide up to date economic information during the coronavirus crisis. You can view those resources here.

Are you Métis? Fill out your information for your FREE financing consultation.