With so many restrictions on where you can go since the COVID-19 pandemic hit, people have ended up exploring their own province more than ever before.

This change in travel choices was a boon to Jason and Trina Malbeuf’s Barrier Lake Resort, which they say saw a 25 per cent increase in bookings during the summer.

“It was a surprise,” Jason said. “We weren’t sure how it was going to play out.”

When the pandemic first hit, the resort was forced to shut down along with their restaurant, which wasn’t set up for takeout or drive thru.

They applied for a loan through the Clarence Campeau Development Fund (CCDF) so that they could renovate the restaurant, create signage and add more seating, allowing them to open up again. CCDF provides funding and capacity for business and community development for both new and existing Métis-owned businesses.

Trina said that although the loan did help them get ready to open up again, initially, they lost four weeks of bookings and profit. 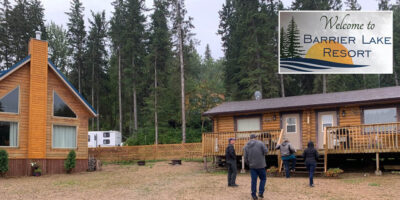 “It created a lot of uncertainty,” she said.

When they could open up again later in the spring, at first they didn’t get the bookings they were expecting.

“We had to come up with some new ideas,” Jason said.

One of their new ideas was to add their resort to Airbnb, and about two-third of their rentals ended up coming through that platform this summer.

The visitors were almost all new clientele, introducing many people to the area north east of Saskatoon, close to Greenwater Lake Provincial Park.

Trina said one of their new visitors used to take their family to B.C. for summer vacations, but heard people there were vandalizing vehicles from out of province, so they booked a local vacation instead.

The family booked five weeks but ended up staying for seven.

“They didn’t realize there was something like this in Saskatchewan,” Trina said. “They were very happy.”

About the Clarence Campeau Development Fund

The objective of the Fund is to stimulate economic development activities of Métis people and communities. As the first stop for Métis entrepreneurs and communities in Saskatchewan, we leverage relationships with funding partners, industry, and communities to meet the evolving needs of Métis businesses.

Are you Métis? Fill out your information for a FREE financing consultation.

Entrepreneurship program aims to grow representation of Metis women March 30th 2022 A new initiative has been launched to help support Metis women starting their own businesses. Audra Hill is a Metis entrepreneur and owner [...]